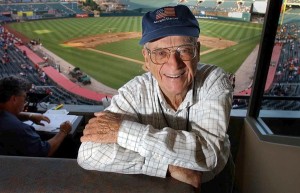 (This testimony was written by Jacqueline J. Repp of MLB.com)

For, lo, the winter is past,  The rain is over and gone;  The flowers appear on the earth;  The time of the singing of birds is come,  And the voice of the turtle is heard in our land.

After 55 years of broadcasting Major League games, including 42 years with the Tigers, Hall of Fame broadcaster Ernie Harwell has entred his eternal reward with Jesus Christ.

Often referred to as the Voice of Tigers Baseball, Harwell, 92, would open each season by reciting the “Song of the Turtle,” a stanza that celebrates the freshness of spring, renewed life and opportunities, and ushers in the baseball season for Tigers fans the world over.

Respected by the players, beloved by the fans, Harwell has had a lasting impact on the world of baseball.

“Ernie Harwell stands, as much as anybody as I can think of, as a positive representative of what the game of baseball should and does stand for,” said Bill Freehan, a Tigers catcher from 1963-76, upon the announcement of Harwell’s upcoming retirement. “His memory will be long lasting and the quality of man he is will never diminish.”

“Ernie is probably the most beloved person who has ever been in Detroit with the Detroit Tigers,” Al Kaline said. “He is loved by everybody and rightfully so. He’s a great broadcaster but even a better person. That comes across on his broadcasts.”

To the broadcasting community, Harwell is an honored example of greatness. He received the Ford C. Frick award for broadcasting excellence from the National Baseball Hall of Fame in 1981. He was the first active broadcaster to be inducted into the Baseball Hall of Fame at Cooperstown and has been inducted into the Radio Hall of Fame (1998), the National Sportscasters Hall of Fame (1989) and the Michigan Sports Hall of Fame (1989). He has been named the Michigan Sportscaster of the Year 17 times. To the fans, Ernie Harwell is a baseball icon at the level of greats like Ty Cobb and Babe Ruth. His unmistakable voice and fast-paced play-by-plays have made him a cornerstone in Tigers baseball.

Dedicated fans are known to bring radios to the ballpark or mute the sound on the television to instead listen to Harwell’s broadcast of the game. His friendly, open demeanor and genuine interest in the fans have made him a true fan favorite. At Joker Marchant Stadium in Lakeland, the Tigers’ Spring Training facility, Harwell is often stopped for a friendly handshake or a request for an autograph or is presented with fans standing on the back of seats to peer into the press box for a glimpse and friendly word with the beloved broadcaster.

Harwell’s contributions to Tigers baseball and the fans will be celebrated with special events at Comerica Park throughout the season. In addition, this tribute to Ernie Harwell: The Voice of the Tigers will allow fans to send Harwell messages of farewell, best wishes and gratitude to honor his long service to Detroit and his place in baseball history.

“All in all, it has been a great run for me,” Harwell said. “But most of all, I think I owe thanks to the people who have listened to me over the years, who tuned in on the radio. They have given me a warmth and loyalty that I’ve never been able to repay. The way they have reached out to me has certainly been the highlight of my life.

“If somebody wants to pay attention to me, I’m human enough to like the attention, for heaven’s sake. It’s nice to read good stories about yourself. I really look at myself as somebody trying to do their job, that’s all. I’m lucky maybe to be in the spotlight a little bit.”

Jacqueline J. Repp is a Marketing Producer with MLB.com.