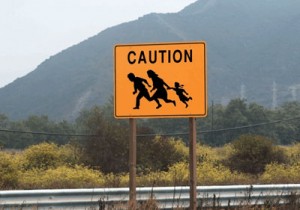 The Christian response to immigrant communities in the United States cannot be “You kids get off of my lawn” in Spanish. While evangelicals, like other Americans, might disagree on the political specifics of achieving a just and compassionate immigration policy, our rhetoric must be informed by more than politics, but instead by gospel and mission.

I’m amazed when I hear evangelical Christians speak of undocumented immigrants in this country with disdain as “those people” who are “draining our health care and welfare resources.” It’s horrifying to hear those identified with the gospel speak, whatever their position on the issues, with mean-spirited disdain for the immigrants themselves.

This is a gospel issue. First of all, our Lord Jesus himself was a so-called “illegal immigrant.” Fleeing, like many of those in our country right now, a brutal political situation, our Lord’s parents sojourned with him in Egypt (Matt. 2:113-23). Jesus, who lived out his life for us, spent his childhood years in a foreign land away from his relatives among people speaking a different language with strange customs.

This is much more than a “political” issue, abstracted from our salvation. Jesus tells us that our response to the most vulnerable among us is a response to Jesus Himself (Matt. 25:40). God will judge those who exploit workers and mistreat the poor. No matter how invisible they seem to us now, God hears (Isa. 3:15; Amos 4:1; Jas.5:4).

This is also a question of our mission. There are upwards of 12 million undocumented immigrants in this country right now, and many more in the Latino community who came here legally. If our response to them is to absorb the nativism and bigotry of some elements of society around us, we are showing them a vision of what the Bible calls “the flesh” rather than the Spirit. If our churches ignore the nations around us who are living in our own communities, we will reflect 1970s Bible Belt America rather than the kingdom of God which is made up of those from every tribe, tongue, nation, and language (Rev. 7:9).

It is easy to lash out at undocumented immigrants as “law-breakers,” and to cite Romans 13 as reason to simply call for deportation and retribution. But this issue is far more complicated than that. Yes, undocumented immigrants are violating the law, but, first of all, most of them are doing so in order to provide a future for their families in flight from awful situations back home. Many of them are children (as our Lord Jesus was at the time of his immigration).

And, even given our nation’s Romans 13 responsibility to maintain secure borders, the message our nation sends to those across our borders isn’t clear and univocal. As Southern Baptist leader Richard Land puts it, there are two metaphorical signs on our border: “Keep out” and “Help wanted.”

This isn’t to say that there aren’t real political challenges here. I agree that the border should be secured. I support holding businesses accountable for hiring, especially since some of them use the threat of deportation as a way of exploiting these vulnerable workers. I support a realistic means of providing a way to legal status for the millions of immigrants already here. But there are many who disagree with me, and for valid reasons.

The larger issue is in how we talk about this issue, recognizing that this is not about “issues” or “culture wars” but about persons made in the image of God. Our churches must be the presence of Christ to all persons, regardless of country of origin or legal status. We need to stand against bigotry and harassment and exploitation, even when it’s politically profitable for those who stand with us on other issues.

And, most importantly, we must love our brothers and sisters in the immigrant communities. We must be the presence of Christ to and among them, even as we receive ministry from them. Our commitment to a multinational kingdom of God’s reconciliation in Christ must be evident in the verbal witness of our gospel and in the visible makeup of our congregations.

Immigration isn’t just an issue. It’s an opportunity to see that, as important as the United States of America is, there will be a day when the United States of America will no longer exist. And on that day, the sons and daughters of God will stand before the throne of a former undocumented immigrant. Some of them are migrant workers and hotel maids now. They will be kings and queens then. They are our brothers and sisters forever.

We might be natural-born Americans, but we’re all immigrants to the kingdom of God (Eph. 2:12-14). Whatever our disagreements on immigration as policy, we must not disagree on immigrants as persons. Our message to them, in every language and to every person, must be “Whosoever will may come.”

Russell Moore is the Dean of the School of Theology and Senior Vice-President for Academic Administration at The Southern Baptist Theological Seminary. This article is reprinted by permission from his blog.