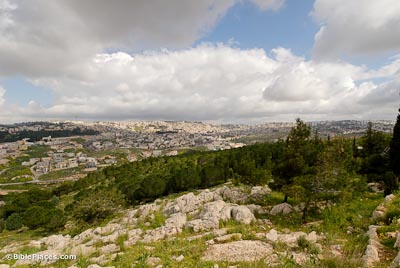 “After Herod died, an angel of the Lord suddenly appeared in a dream to Joseph in Egypt, saying, “Get up! Take the child and His mother and go to the land of Israel, because those who sought the child’s life are dead.” So he got up, took the child and His mother, and entered the land of Israel. But when he heard that Archelaus was ruling over Judea in place of his father Herod, he was afraid to go there. And being warned in a dream, he withdrew to the region of Galilee. Then he went and settled in a town called Nazareth to fulfill what was spoken through the prophets, that He will be called a Nazarene.” (Matthew 2:19–23, HCSB)

Walk through the town where Jesus grew up! Situated inside a bowl atop the Nazareth ridge north of the Jezreel valley, Nazareth was a relatively isolated village in the time of Jesus with a population less than two hundred.

Very little is known about Nazareth from the ancient sources.  Outside of the New Testament, Nazareth is never mentioned until the Byzantine period (4th c. AD).

Archaeological excavations have confirmed that the city was only a small agricultural village during the Hellenistic and Roman periods.

A Byzantine church was built over the place where it is believed that the angel Gabriel announced the birth of Jesus to the virgin Mary.  In 1966 the Roman Catholic Church began constructing a new basilica over these remains and today this church is the largest church building in the Middle East.  The Greek Orthodox Church nearby is built over the town’s water source.

Jesus spent his boyhood years in Nazareth before beginning his ministry when he was about 30.  After moving his home to Capernaum, Jesus returned to teach in the synagogue of Nazareth twice more, but was rejected both times.  On one occasion the townspeople were so outraged at Jesus that they tried to throw him off a cliff to his death.

You will see this as you tour Israel with us in February 2013!

We look forward to touring with you in Israel in February!