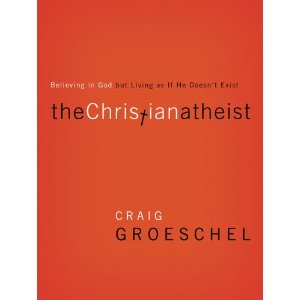 Craig Groeschel has written a book called The Christian Atheist – and I believe it is a MUST read for all who call on Jesus.

The Christian Atheist is quite an eye-catching title – one that seeks to encourage us to live the Christ-life, without hypocrisy. Christian atheism is best explained as where people believe in God but live as if he doesn’t exist. You will enjoy Craig’s great writing style – he communicates very well in this book using humor liberally.

Christian Atheism takes on many characteristics, and Craig lists 12 in his book.

Early in Craig’s life, in a backyard vacation Bible school, Craig chose NOT to go to hell – so he ‘accepted’ Christ. However, as he moved into high school his ‘faith’ was disconnected from his lifestyle. It wasn’t until a low point in college, after reading his Bible, that he realized that being a Christian was a lifestyle, not a label. Whispering to God, “Take my life,” God did; and, as he says, “For the first time in my life, I believed in God and began to live like he is real.” 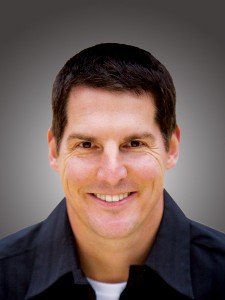 Groeschel takes his stand on clear Scripture and talks about how ‘as you get to know him better, you will change.’ This is at the center of the entire idea of The Christian Atheist.

As Craig wraps the book up, he issues us a challenge entitled ‘Third Line Faith,’ a challenge God first gave to him. With three lines in the sand, God asked Craig if he would step over the third line – each line representing a clear belief system and choice:

Line 1: I believe in God and the gospel of Christ enough to benefit from it.

By this he means, “We want God’s benefits without changing how we live. We want his best, without our sacrifices.”  Concerned this may not be real Christianity Craig pressed on to understand the second lifestyle choice he could make …

Line 2: I believe in God and Christ’s gospel enough to contribute comfortably.

Here he understood that his belief in God was “not only enough to benefit [from] but also enough to give back – as long as it doesn’t cost too much.” Realizing this was where he was at the moment God was speaking to him, he longed for the lifestyle of those who step across the third line …

Line 3: I believe in God and Christ’s gospel enough to give my life to it.

He says, “Although most people I knew were line-one and line-two believers, suddenly anything less than line three didn’t seem like real Christianity to me. Could I give my whole life to Christ? Not only in words but in my daily life?” Through a series of decisions and choices, Craig finally crossed the third line, and now he asks you to do the same and allow him to “welcome [you] to true Christianity.”

This book is for anyone courageous enough to admit to their hypocrisy. It pushes you, challenges you, and disturbs you. And if you are honest before God the lessons in this book will help you shed some of your hypocrisy as it did for me.

You can order your copy of the Christian Atheist here.