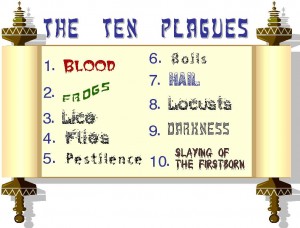 Editor’s Note: We continue our series of blogs for those who are reading the Bible with us cover-to-cover this year. Interspersed with our thoughts on our daily reading, we want to provide some tips about reading the Bible in general. Today we want to move on and see how  …

We will now see the formation of almost everything the true, avid traveler of the Bible needs to know in order to understand God’s work with the people of Israel. Much of God’s work today with the people who call Jesus Christ their Savior and Lord finds its basis in this section of the journey. As we travel out of Egypt and are instructed by God in the ways to run the nation of Israel we begin to understand the rich meaning to much of the message of the New Testament. This section reveals the heart of God. As He speaks and as He acts, be sure to watch Him at work. Attempt to understand both what He is saying or doing and why He is saying or doing it.

We see Moses deliver the simple message of God to Pharaoh in one of the most famous sections in the Old Testament:

Afterward Moses and Aaron went in and told Pharaoh, “Thus says the LORD God of Israel: ‘Let My people go, that they may hold a feast to Me in the wilderness.'”

Pharaoh arrogantly refuses this initial request, and sets up a demonstration of who is truly in control of Egypt, the Earth, and the universe for that matter! However, after the seventh plague, Pharaoh’s advisers beg him to comply, stating flatly that he can no longer continue the charade that he is in charge:

Then Pharaoh’s servants said to him, “How long shall this man be a snare to us? Let the men go, that they may serve the LORD their God. Do you not yet know that Egypt is destroyed?”

Although Pharaoh initially seems to comply, he then changes his mind and is lead to certain destruction because of his stubborn resistance to the God of Heaven. While you read through this section, you will note the following plagues:

Passover becomes the most sacred event in the Jewish calendar because of its significance! It is to be celebrated every year as the first of the annual feasts. (Exodus 12.14-20; 23.14-19) Later, in the New Testament this feast will become the focus of Jesus Christ’s sacrifice as the Passover Lamb, slain for the sins of the world, not just for Israel. We will talk more about that when we get to the New Testament Island of our travels.

At this point, Pharaoh concedes and allows the children of Israel to leave. God had prepared them for this moment by instructing Moses on what to do when they were allowed to leave. He said,

And the LORD said to Moses, “I will bring yet one more plague on Pharaoh and on Egypt. Afterward he will let you go from here. When he lets you go, he will surely drive you out of here altogether. Speak now in the hearing of the people, and let every man ask from his neighbor and every woman from her neighbor, articles of silver and articles of gold.”

The children of Israel complied with this instruction:

Now the children of Israel had done according to the word of Moses, and they had asked from the Egyptians articles of silver, articles of gold, and clothing. And the LORD had given the people favor in the sight of the Egyptians, so that they granted them what they requested. Thus they plundered the Egyptians.

This action remunerated the Hebrew slaves for their years of work without pay and allowed them to leave Israel both strong from the physical labor and financially well off from this “plundering” of the Egyptians.

It is our hope that this background information helps a bit as you read on in the Bible. We will continue this series with our next installment: “The Difficulty of Knowing God” on Thursday.