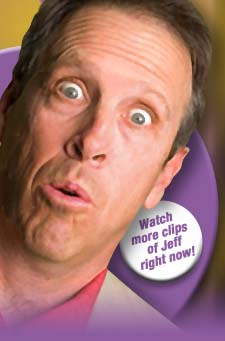 possible. His Happy Wife, Happy Life® message of a marriage gone wrong and redeemed has given laughter and encouragement to millions of people. Jeff’s comedy drives home the humor in everyday family life and the joy derived from a healthy marriage.

At home with secular, religious and combined audiences, Jeff has performed on every US cable comedy show, in Las Vegas, for corporate engagements and in churches all over the country.

Starred in the critically acclaimed film and DVD Apostles of Comedy

Starred in the hilarious comedy DVD Thou Shalt Laugh

Received the Grady Nutt Humor Award – the most prestigious comedy award in the Christian market.

Columnist for Living with Teenagers, Homecoming and Homelife magazines